Modification of claims before publication by the PCT

Home/Patents/Modification of claims before publication by the PCT

Modification of claims before publication by the PCT

Patent’s Cooperation Treaty (PCT). Article 19 pct, and the possibility to modify the claims before the publication of the international application.

When we file a patent application through the PCT system, the first thing we would like to obtain from the Office responsible for the search is the International Search Report (ISR), which informs us of the inventive level of our invention.

From there, we will be able to modify amend as far as possible our application in order to adapt it to the patentability requirements solicited, allowing us to obtain a strong application able to provide us the extent in the countries of interest.

On receiving the ISR, most professionals directly goes to the results of the examiner, without paying much attention to the rest of the documents attaches by the International Patent Office, specifically I mean the following document: 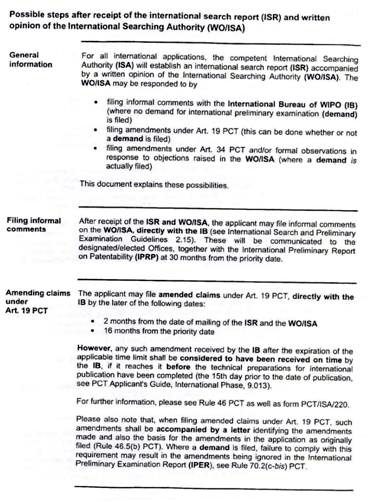 This document informs us of the various options available for us after receiving the ISR, among which there is the realization of modifications of the claims under PCT article 19, regardless of a subsequent request or not of the Preliminary International Examination (IPER). Besides, these changes will be included in the publication of the application.

Modification of claims before publication by the pct: requirements

The International Patent Office also informs us of the requirements in order to apply for the modifications of PCT article 19. These requirements are:

1        The application must be filed directly before the International Bureau (IB) within one of the following period which expires later:

However, if the application is filed after these deadlines, the International Bureau will continue to consider it as submitted on time, if and when all the preparations for the publication of international application has not been completed.

2        A new set of claims should be provided in order to replace the previous ones, in which will be included the modifications made along with an explanatory letter that:

3        The language of the new set of claims shall be the same as the one of the original application, considering that it is going to be published with that.

4        The modifications realized cannot represent a substantial change on the content of the original patent application.

In conclusion, simply note that since all the modifications to the claims under article 19 are published within the PCT international application, these amendments may be useful to the applicant, if there is a reason to better define the scope of the claims towards the provisional protection of designated states whose national law includes such protection.