How to patent in Spain: inventions, products, etc.

How to patent in Spain: inventions, products, etc.

Every patent in Spain is filed and examined in the Spanish Patent and Trademark Office (SPTO). To start the process it is necessary to file a patent application in which is included a descriptive memory of the invention.

While preparing this specification, it should be taken particular care at the claims, since in it must be reflected the conditions and terms for which we request the Patent Office to grant the monopoly.

Once the application is accepted, it is given a filing date, which will be the equivalent to its date of birth, and the starting point and reference for any further action, as well as for the validity of the patent.

Given the complexity involved in creating an application that provides adequate protection for an invention, it is highly recommended to have an IP Law Firm advising the process and, with its expertise and in coordination with the inventor, developing the patent’s specification.

In addition, a professional should advise on what can and cannot be patented and make an assessment of the viability of the patent. Clarifying that is not possible to patent an idea as such, what is protected is the practical realization of it, if it meets three basic requirements: inventions that are novel in the absolute sense, which involve an inventive step and are capable of industrial application.

The patent registration in Spain involves the following steps: 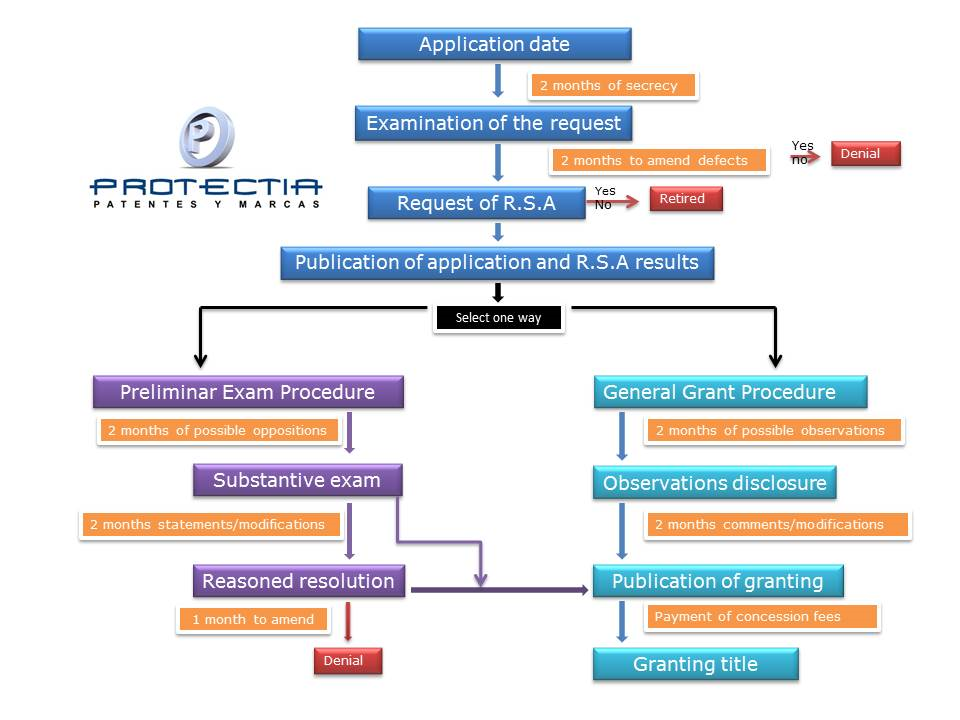 As shown in the diagram above, the system to register a patent in Spain has the peculiar existence of a two-steps process.

As a consequence of this two-way process to patent a product or invention in Spain, halfway along the way is necessary to choose whether the patent application should be submitted to Substantial Examination (novelty and inventive step), for which it will be necessary the payment of a fee and its explicit request, or to continue the process by the general grant procedure (without Examination, which is not recommended since the granted patent will be weak).

The result of the general grant procedure usually end in the direct granting of the patent, despite the existence of relevant prior rights or the existence of observations made by third parties with strong arguments against. Therefore, the right obtained with a patent granted by this way is weak and offers a lower legal force. For this reason, this procedure will be abolished in the long run.

The process with preliminary examination is the most recommended, since applications are submitted to a “test” of novelty and inventive step, besides a period of possible third-party oppositions. Therefore, the right obtained with a patent granted by this way is much more solid legally speaking.

Besides, it is possible to realize modifications in the report, based on the RSA results before the application of the procedure with exam, which is other great advantage.

The choice of one or other of these systems is realized right after the publication of the application and the RSA results. This RSA may be obtained during the first 15 months of the process and its result shows the prior rights existing, thanks to a bibliographical research of the object of the patent’s rights.

The results of this report are further classified based on their degree of impact about novelty and inventive step of the subject of the patent.

Sample of the results of R.S.A

If is not made a clear request of RSA, the application is considered abandoned.

The processing duration of an application for patenting an invention in Spain is approximately 3 years, and the grant bestows protection during a non-extendable period of 20 years, and is subjected to the payment of an annual fee to keep the patent in force.

Finally, it is interesting to know that from the date of filing a patent application, the applicant has a 12 month period to extend said application to any other country, so a good care is necessary not to miss this good opportunity.

Are you interested in the registration of a patent in Spain?