Nowadays video game techonology is so sofisticated that the world created are so accurated and real that we forgot how they looked the first home console systems.

Today we decided to go on a little travel inside the video game history, presenting the man who made possible for us today enjoying the modern video console: Ralph Bear, also known as the serial inventor who built the world’s first video game console.

The video has been developed by David Friedman, from the series of video portraits “Inventors”, for PBS Digital Studios.

Despite being the man who invented video game, probably Ralph Bear is unknown to most of the public.

This 91 years old German engineer is the video games pioneer, inventor of the Magnavox Odyssey, the first true video game (the one that transformed electronic signals into pictures on a screen by way of something called a raster pattern), battery-powered which couldn’t output sound.

Bear created the first prototype in 1967 and over the year different prototypes emerged and new ideas for games; the final prototype came at the end of 1967: it was a machine that offered the ability to play different types of games selectable by a wheel in the housing and including a couple of knobs and rifle to play Light Gun. He covered it with a patterned adhesive faux wood, which gave the name of “Brown Box”.

Ralph Baer is not only the inventor of video game; the list of patents and gadgets in his name encompasses surgical-cutting equipment, “muscle-toning pulse generators,” submarine-tracking radar systems, video simulations for trainee pilots, etc.

If you are curios, you can check the original patent obtained for the Magnavox Odissey: “Television gaming and training apparatus“.

From the abstract: “The present invention pertains to an apparatus and method, in conjunction with standard monochrome and color television receivers, for the generation, display, manipulation, and use of symbols or geometric figures upon the screen of the television receivers for the purpose of training simulation, for playing games, and for engaging in other activities by one or more participants 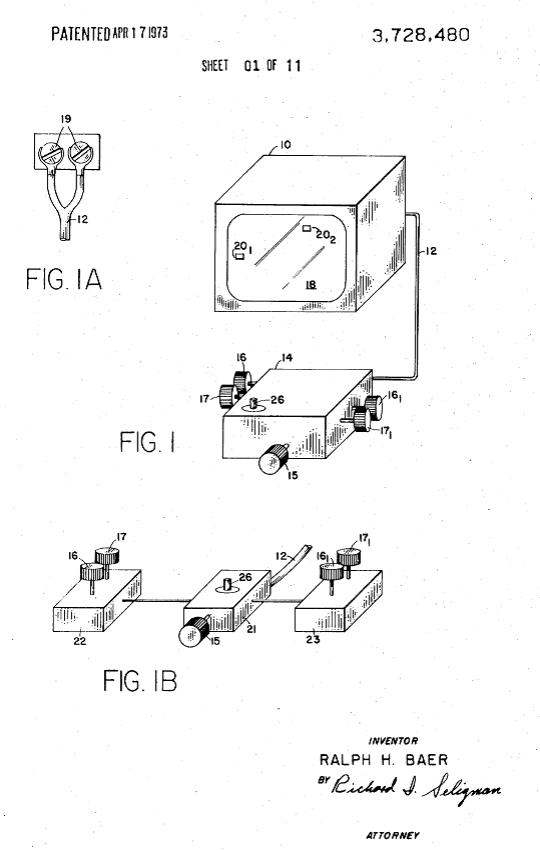