How to patent in Europe: European Patent

How to patent in Europe: European Patent

European Patent. Before we focus on how to patent in Europe, it would be appropriate to clarify some aspects regarding the matter of patents. A patent protects technical improvements characterized by three main features:

The granting of the patent guarantees protection for a non-renewable period of 20 years, and is subjected to the payment of an annual fee to keep the patent in force. From the moment a patent is applied, 12 months are available to extend the application to any other country or group of countries.

A European Patent shall meet these requirements and also have 12 months term to be extended to any other country or group of countries of another continent.

Its aim is to get the protection of invention easier and cheaper than the one which can be obtained through national procedures. The granting of the European Patent will produce the same effect as a national patent in case of it was filed directly in the patent office of each member states.

Currently the following countries are part of the European Patent Convention:

The process can be initiated in several ways:

The process of an European Patent is divided into two phases:

There is an optional intermediate step between the two phases that aims to obtain provisional protection in each member country. After the publication of the application, the claims can be translated into the official language and sent to the relevant national patent office.

Generally, the process of an European patent is the following: 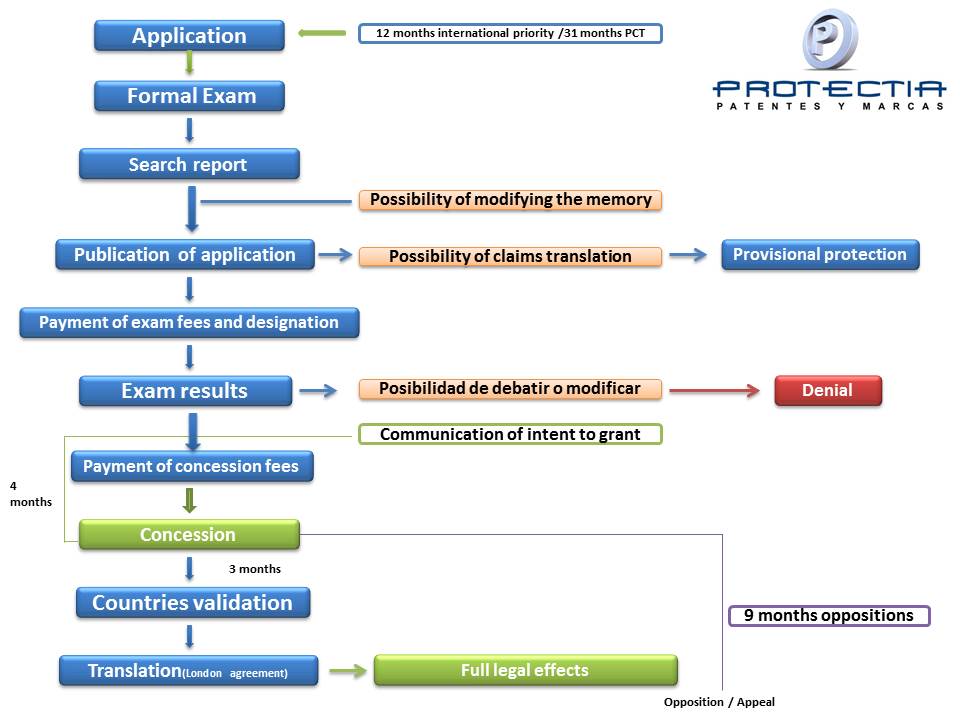 The European Patent has the peculiarity of being subject to the payment of annuities from the third year of the application until the resolution of the case. In addition, once validated, annual payments shall be made in each one of the countries in order to maintain the monopoly.

For full legal effect, after the granting of the patent, it should be made the translation to the official languages. The London Agreement on the new conditions of validation of the European Patents (May 2008) represents a significant cost savings in translations, due to:

In conclusion, it can be said that for patenting in Europe the most recommendable way is the filing of a European Patent application, for:

Are you interested in the registration of a European Patent?